Please note, this game will be played behind locked doors.

Suphanburi are being tipped by many to be relegation candidates but are currently sitting pretty in 6th place. This an important fixture for the Swatcats, if they win, 6 points from 5 away games would be very positive, if they lose, they will see themselves floundering near the bottom of the league with confidence low.

The Swatcats head to Ratchaburi this weekend for their fourth successive away game due to renovations at the 80th Anniversary Stadium. 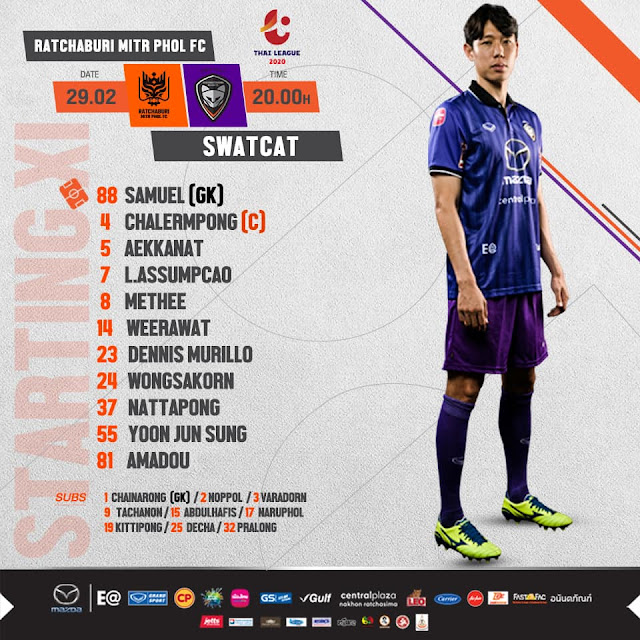 After slow start in front of a meagre crowd, the home side settled and began to confidently knock the ball around. A long-range shot slid ominously past the Swatcat upright in the 17th minute as Ratchaburi pressed.

Playing a solid 5 at the back, the Swatcats sat deep with little attacking ambition, inviting the Dragons to flood forward. Samuel smothered a Jakapan effort in the 26th minute and then a Boli shot shaved the bar as the keeper floundered.

It seemed that the Swatcats must succumb to this continual pressure as Samuel again saved a goalward shot. At the other end, zilch, absolutely zilch - my question 30 minutes in, was, “can we get away without a real shellacking”.

Well, 0-0 at half time, with no hope of a goal from the visitors and a good bet that Ratchaburi would score at least a couple in the second half. 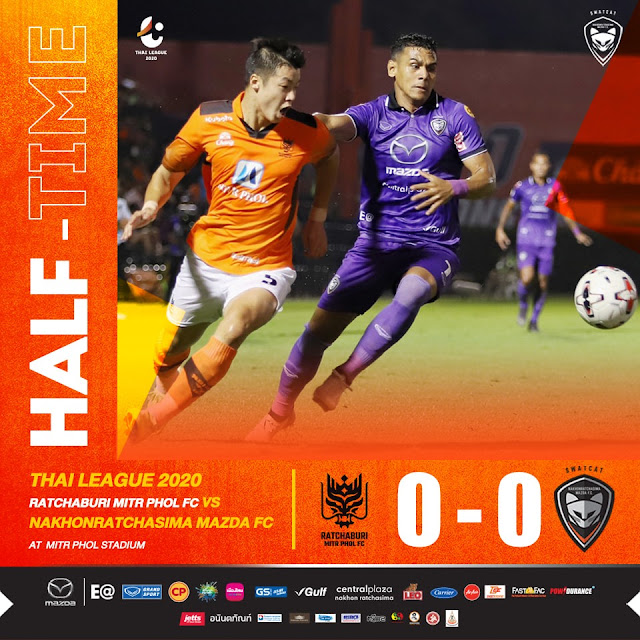 The second half began with more Ratchaburi pressure with Samuel placed under massive pressure on a couple of occasions. The visitors continued to defend bravely with the team rarely getting out of their own half or managing to put a couple of passes together.

Out of the blue, a mazy run and delicious Amadou cross nearly found the head of Murillo and it sailed inches wide of the far post, seconds later Assumpcao found himself clear but his low shot was saved by the keeper.

With the home side getting frustrated and resorting to long balls forward, a point was looking possible, and in a late flurry, Pralong hit the post with an angled shot then Amadou had a goalward shot blocked. From the resulting corner Assumpcao had a header saved on the line and the ball was scrambled away.

In the 92nd minute Amadou was sent off after his second innocuous challenge and following intense late pressure, Ratchaburi snatched a winner in the 94th minute when Javier Patino nodded in to rob the Swatcats of an unlikely point. 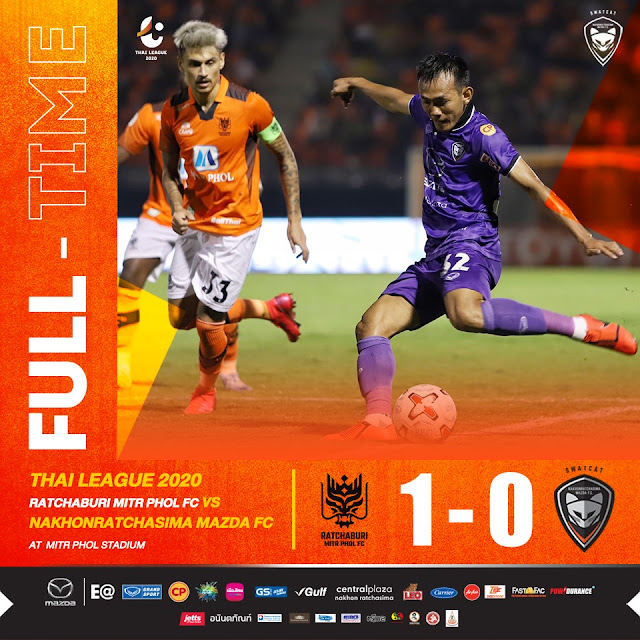 A brave but uninspiring display. At last the coach started with 5 at the back thus preventing runs down the flanks - a couple of games too late in my opinion. The defence did look more composed against a strong Ratchaburi attack but apart from a 15-minute second half spell, nothing was produced up front.

I am not seeing too many signs that a successful season is in front of us but I suspect we will get a better idea after a couple of home games. At least the flow of goals against has been stemmed, but why I as a mere fan could see the solution two games before the coach frightens me a little!! 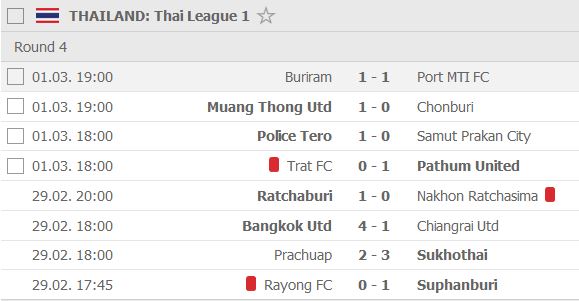 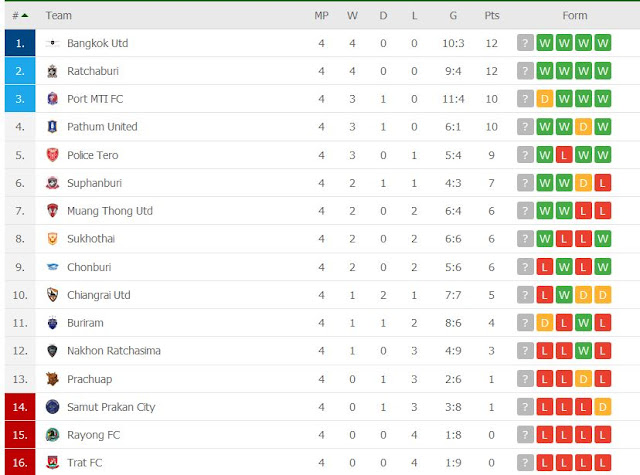 Ratchaburi fresh from their victory over Buriram are currently sitting second in the league will provide stiff opposition. I am going to stick my neck out and go for a Swatcat victory!! 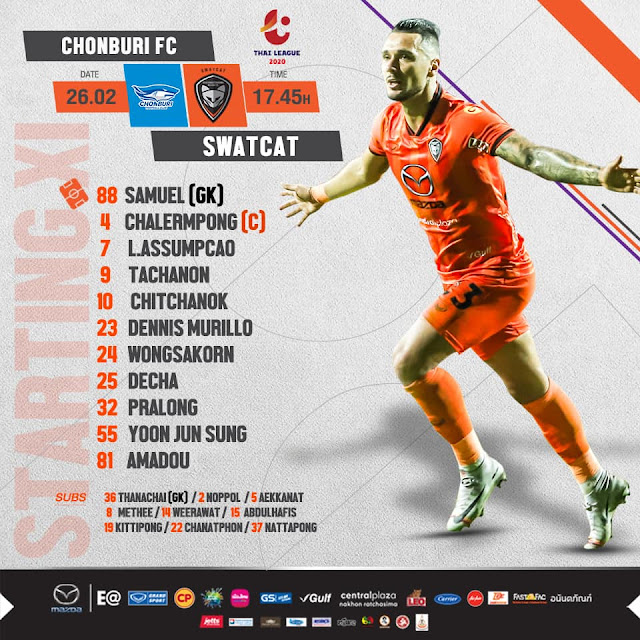 After a somewhat frenzied start with most action in midfield and no clear-cut chances created, the Swatcats were slightly fortunate in the 31st minute when a decidedly ordinary shot from Wongsakorn trickled into the net after a deflection from the despairing Shark’s keeper. 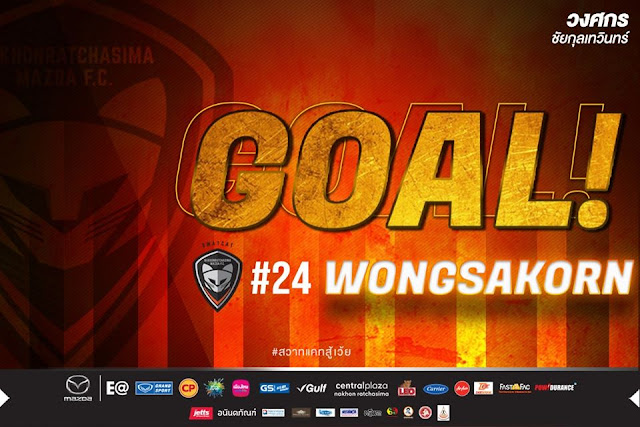 The visitors then fought hard to maintain their lead and on balance, as the first half ended, the visitors just about deserved their one goal lead. 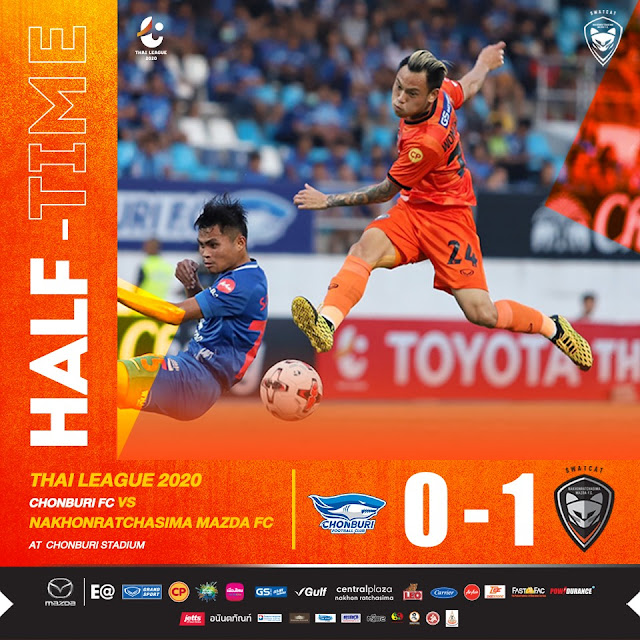 The second half began with the Sharks coming out with all guns blazing and after almost constant pressure they were rewarded in the 53rd minute with a simple tap in from De Murga. As the Sharks flew forward, a second and perhaps a third looked likely as the Sharks dominated play. Sure enough, in the 63rd minute a penalty was awarded for handball and Caion converted the spot kick to put the Sharks two up.

The visitors rallied searching for an equalizer but the Sharks put the game to bed with a 91st minute killer punch as Caion added a third when he was left one on one against a tiring Swatcat defence. 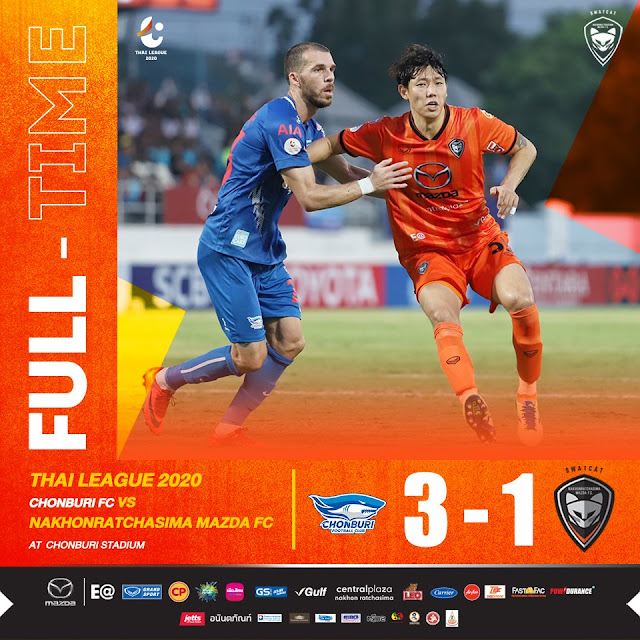 Chonburi certainly bossed the second half and were deserved victors. The Swatcats played with pace and conviction but were unable to create much up front. No need to panic, three points from 3 away games is a decent start. I suspect we will see different tactics when we eventually play at home. The defence continues to be a concern. The Sharks coaching staff had obviously watched our previous two games and continually exposed our defensive weakness on the flanks - why coach Teerasak has not identified this weakness is a worry for me - 8 goals against in three games is pretty worrying. 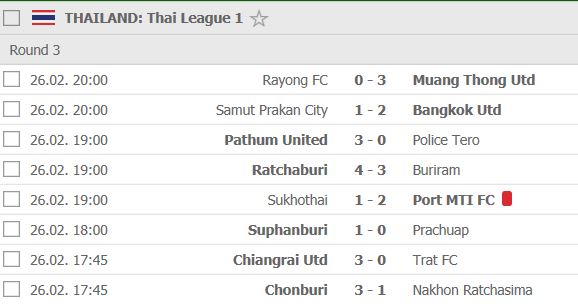 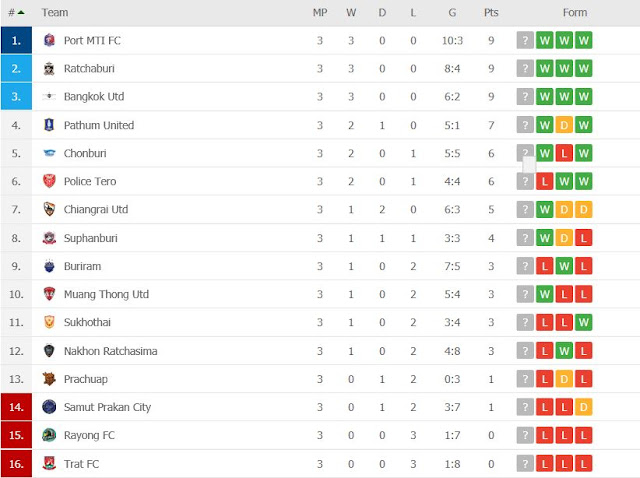 The Swatcats continue their East Coast endeavours when they take on the Chonburi Sharks in the next round of TPL fixtures (Wednesday 26th February, KO 1745 hours, TV coverage TBC).

This is a difficult one to call but I suggest that the Swatcats, following their victory at Rayong, may get something from this match.

In their second away match, the Swatcats were on the East Coast to take on newly promoted Rayong FC. 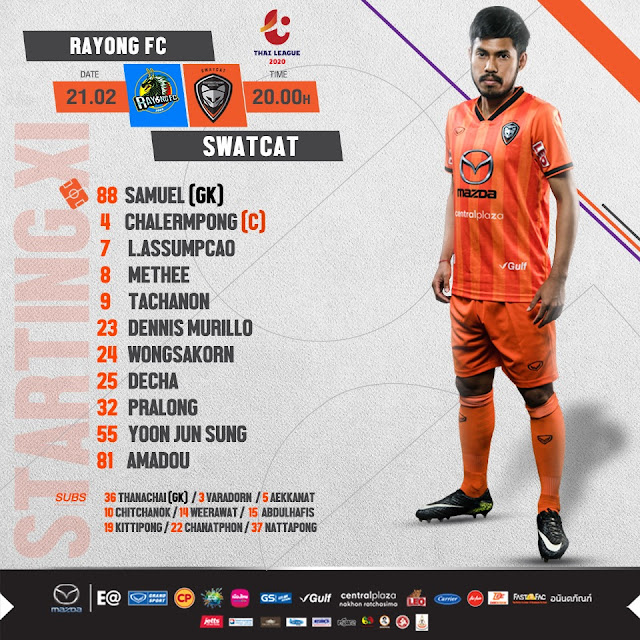 In a sign of things to come, Leandro Assumpcao went close with a free kick in the fourth minute as the visitors pressed. The home team looked very lively up front with slightly kamikaze intent allowing space at the back at times that the Swatcats looked to exploit, with Amadou in particular continuing to look dangerous.

In the 14th minute Assumpcao latched onto a smart pass from Amadou and slotted home superbly from 18 yards to give the Swatcats the lead. The Swatcats then defended doggedly as Rayong pressed for an equalizer. 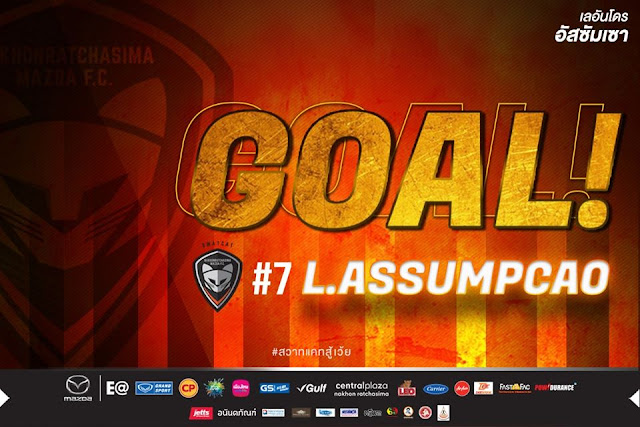 As a largely incident free half drew to a close, the visitors were good value for their one goal lead. 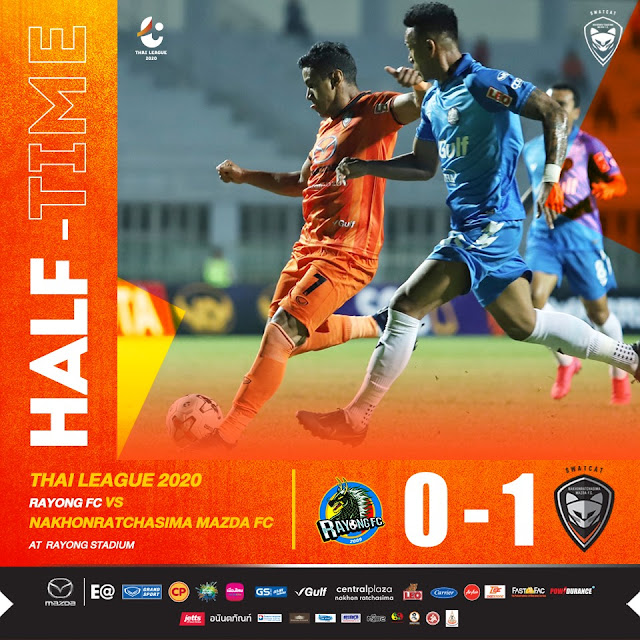 The second half began with Rayong huffing and puffing without producing clear chances, with the visitor’s somewhat agricultural defending keeping them out.

With the game meandering with no real volition from either side, the game burst into life in the 70th minute when Dennis Murillo wacked in a superbly taken free kick from outside the box - my view from behind the goal suggested a boomerang like swerve in the shot’s flight that deceived a sprawling keeper. 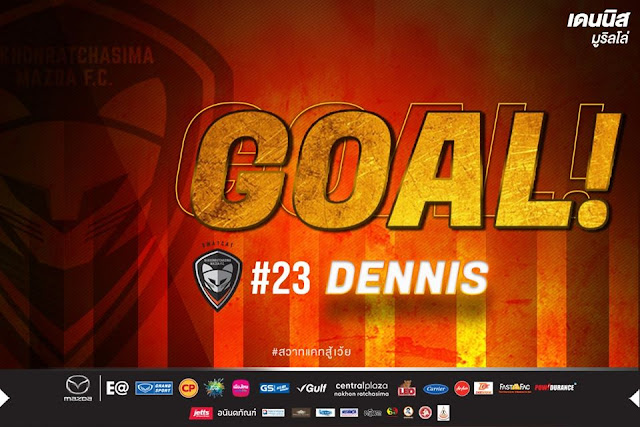 Rayong countered and a free kick just outside the box was inches wide, then real controversary as Rayong were awarded a penalty in the 87th minute after a VAR review. Keeper Cunningham brilliantly kept the spot kick out but VAR had spotted that he was off his line. The kick was retaken and converted leaving the home side with a sniff of a point. The visitors however remained composed and held on for the three points and a vital victory. 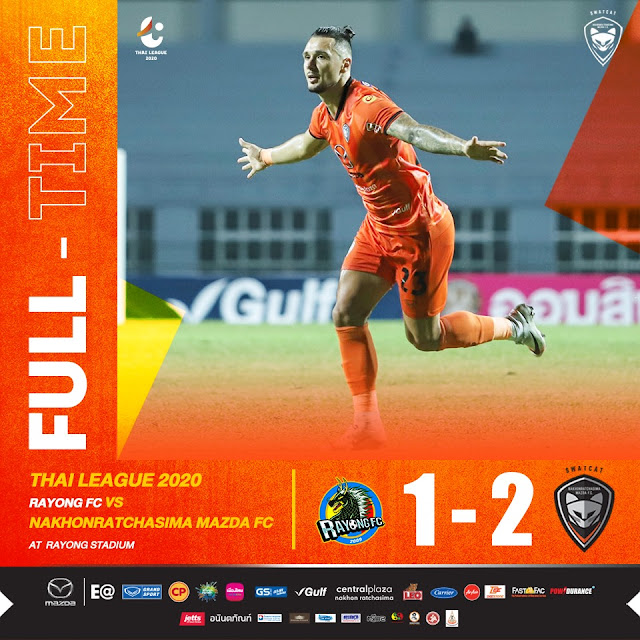 Well a rugged defensive display (I’m still not convinced !!), two tremendous goals from our Brazilians and three points away from home. Our defence will however, continue to be destroyed by better teams. Rayong were bubbly and racy in attack and were unlucky at times but somehow the defence managed to clumsily keep tabs on them.
Murillo is looking good and if we can keep Assumpcao fit, mid table is beckoning - and I for one, will be happy with that!! 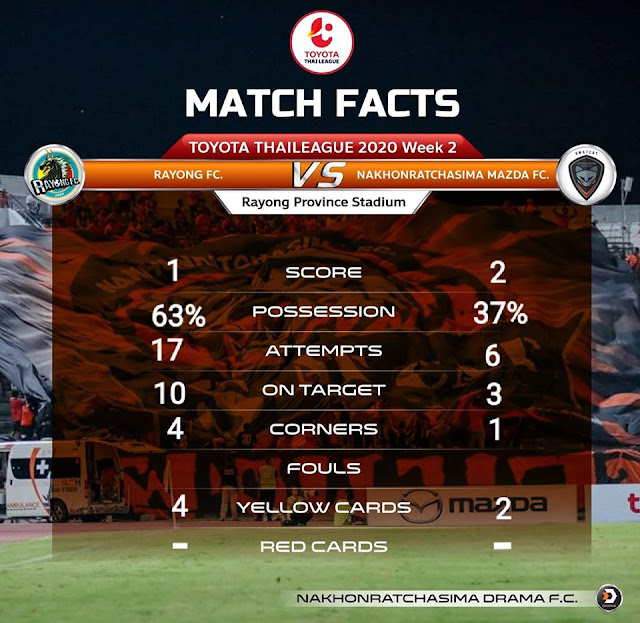 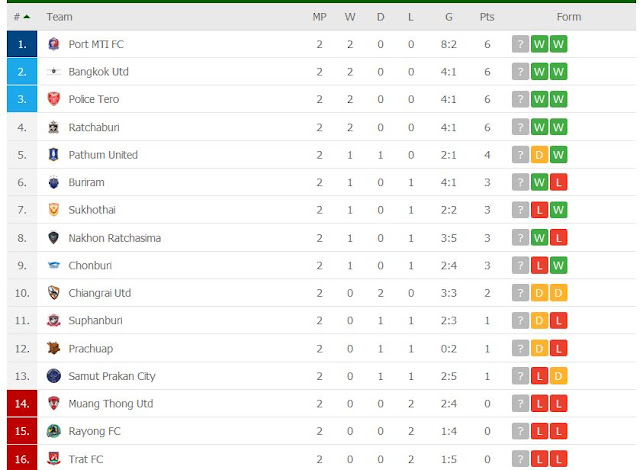 The Swatcats travel to the east coast this Friday to take on Premier League newcomers Rayong (Friday 21st February, KO 2000 hours, TV coverage Truesports HD2). Rayong are most pundit’s favourites for relegation and the game should represent a chance of three points for the Swatcats.

Thaiwolf’s prediction; Away win.
Posted by Swatcat Fan at 20:20 No comments: